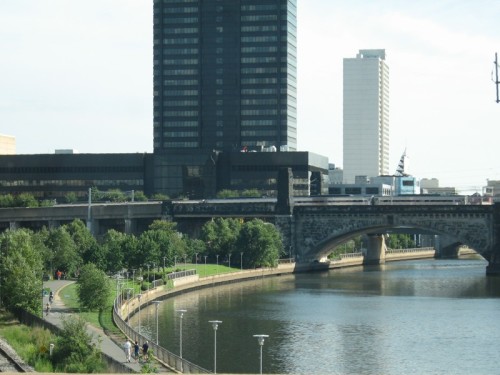 (Actually, I’m not sure whether the “patterns” challenge is still open or not. My computer was unusable for a couple of days, and I’ve barely started to go through my backlog of email. But even if there’s a newer topic by now, at least I can come up with a post on this subject after missing half a week – so here goes.)

I photographed these patterns in Philadelphia last summer, but each of them is only a small piece of the original picture. Can you guess what the real subject was?

And here you are – the uncropped photos: 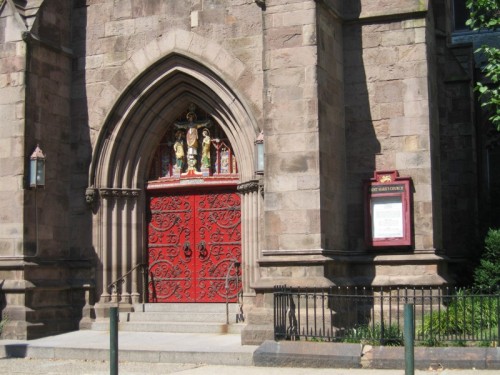 A fountain in Rittenhouse Square

Day before yesterday, I met with a friend, and we walked through a large chunk of center city Philadelphia, taking pictures as we went. A few of them –

Some walls in Philadelphia have murals painted (or otherwise constructed) on them, like this one  – the “Lincoln Legacy Project” – in the 700 block of Chestnut Street.

I couldn’t get all of this mural in one photo. It faces into a narrow parking lot… 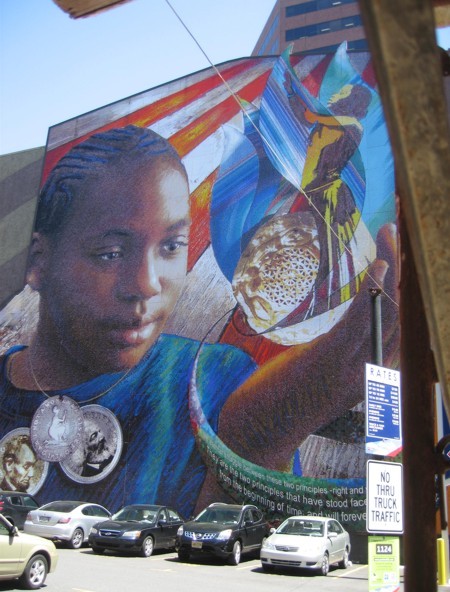 …and if I had stepped back any farther, the mural would be hidden by the building on the other side of the lot. (Or else I’d have been standing in the middle of Chestnut Street, which isn’t a good idea.) You’d need a wide-angle lens to photograph the whole thing, and I didn’t have one.

(I’d give you more information about the mural, but the mural project website doesn’t discuss its meaning – I suppose it speaks for itself. I can tell you that it’s partly a mosaic made of more than a million glass tiles, and that the left side was painted by inmates at Graterford Prison.)

Then there are walls that are artwork in themselves – 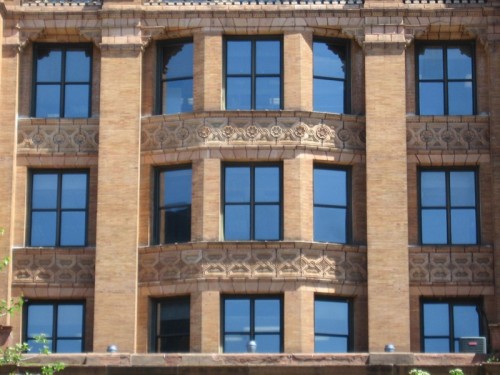 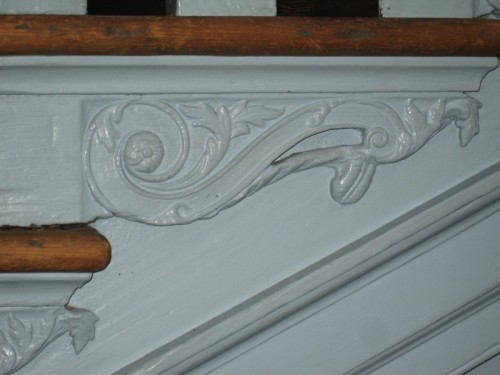 Beside the stairsteps in Independence Hall. 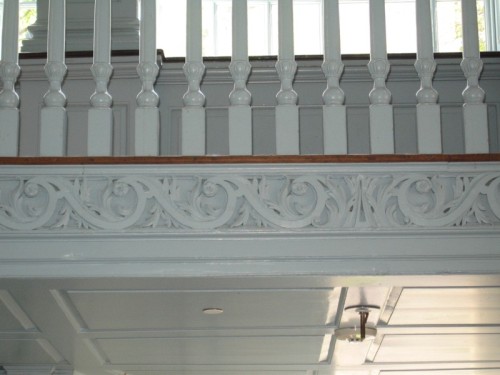 The stair landing in Independence Hall. We often think of eighteenth-century architecture as fairly austere, and compared with what the Victorians built, it is. But builders in the 1700s were perfectly happy to include a bit of ornament, as long as it didn’t compromise the classical proportions of their work.

…it’s time for the Mummers Parade. (To be honest with you, I wasn’t at yesterday’s parade; the only things I get to see at events like that are taller people’s backs. What follows are photos from the television broadcast.)

Mummers can look a little startling at first glance.

And maybe more so at the second look. Yes, it’s a guy in a dress, holding a parasol, at an imitation beach bar. 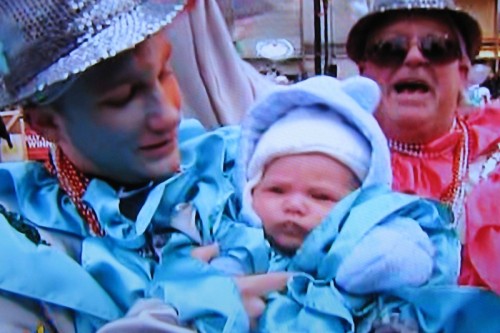 Being a Mummer tends to run in families – some are very, very young.

The choreography and costumes are amazing. This is one of the “string bands” – you can see a couple of the musicians in the right rear of the picture. At least, you can see their instruments 😉

All the scenery has to be moved by hand as the groups march along, by the way – no motorized floats.

What we have here are a lot of cops and teachers and store clerks and firefighters and lawyers and, well, people in any occupation except professional actors or dancers who get together for elaborately costumed and choreographed and competitive performances. And do it again the following year with a new and different show. With feathers.

When I was in Philly last week, there was one building in particular that I couldn’t stop taking pictures of. 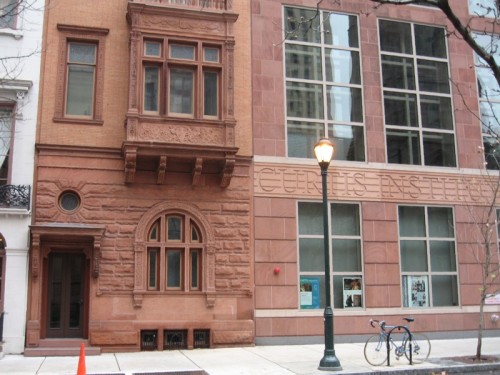 It’s right next to – maybe part of – the Curtis Institute’s Lenfest Hall, and someone was careful to make Lenfest Hall match the red stone of the older building,

but they couldn’t be more different in style. 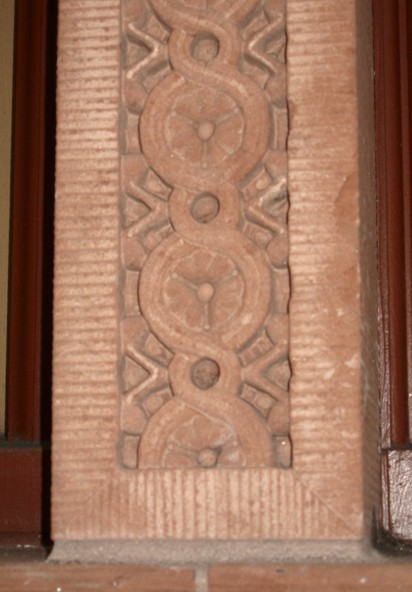 and the scrolled supports under the windows 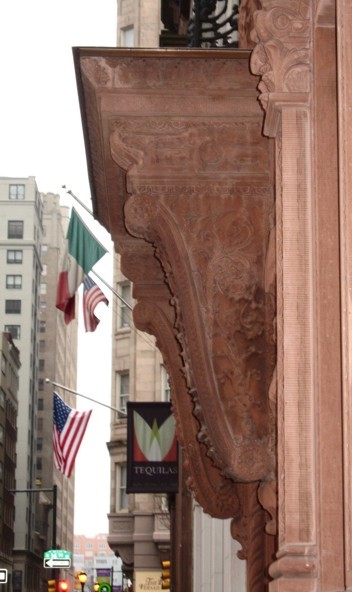 and a side view of the more elaborate porch roof above the door.

There are the birds that embellish the extended window sills, one at the corner of the building and one next to the door. 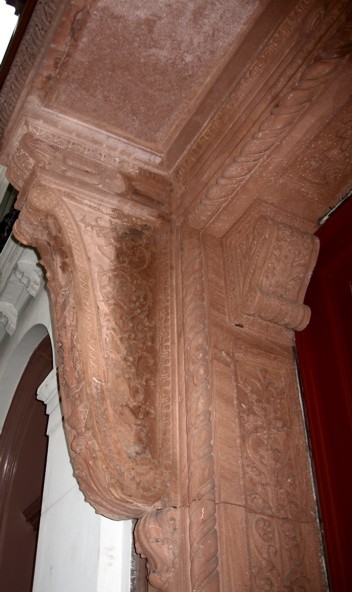 But for stonework run delightfully amok, you have to stand inside the porch and look up at the scrolled supports on either side of the door

and finally, amazingly, at the last place anyone would be likely to look: straight overhead.

I love this building.