Friday Fictioneers: Through the Gate

Well, yes, it’s Saturday now, not Friday. But here’s my best attempt at this week’s Friday Fictioneers – a little tale of a girl who’s determined to find her way into a world of magical perfection, with rainbows.

Your opinion is welcome, as always.

I skipped with joy when I saw the Gate at last. Who cared if I looked silly to mundane bystanders? Soon we would be truly in separate worlds. I’d have a lifetime of wonders to explore, while here, traffic rumbled beyond the screen of trees.

Mystic wisdom glimmered on the uprights. I burst through. I could still hear traffic. Another of those boring informational plaques, just ahead. “Build ten thousand wonders yourself. – Confucius”. A crumpled beer can glittered at its base. Ancient wisdom, huh? I turned to hike back.

The gate was gone. Now the plaque read “You wanted magic? You got it. Learn to use it. And pick up the can.”

I really enjoy Madison Woods’ Friday Fictioneers. I like writing little stories based on Madison’s prompts; I like reading what other people come up with in response to the same stimulus; I like getting and replying to comments on my stories.

But today, I don’t have a story to post. I have an idea. I have a rough draft. But the last few days have been hectic, and the current version of my story just isn’t ready. It’s about 200 words long, twice the length Madison asks for, but I’ve been known to go over the 100 word limit plenty of times. The problem isn’t so much that it’s too long as that it’s loose and sloppy and doesn’t convey the point I’m groping for.

Tomorrow should be just a little calmer. Even though it will be past the deadline, I expect to post a story about that strange gate sometime tomorrow. But tonight? I’m sorry. And if you tried to read the current version of my story, you’d be sorrier.

No, the window doesn’t illuminate another room or anything simple like that. It’s a triangular passage between two walls that meet at an acute angle. Why? Nobody knows.

No comfort zone: A bigger house!

It’s true. In the past two weeks, I’ve started living in a larger house than I used to. And I don’t even have to bother dealing with movers or sending out change-of-address cards or deciding where to put the furniture in differently shaped rooms.

No contractors or exhausting, frustrating DIY projects, either – we’re not building an addition. But the upstairs hall is a foot wider than it was last week, and what used to be my older son’s bedroom looks enormous.

How did I work this magic? It’s all in the books. There used to be four large piles of homeless books lining one side of the hall; they’ve either found places on shelves, or they’re going to look for new homes at the town book sale next week. Same with the bedroom. I’m amazing myself by being willing to shift from thinking, “Well, I’ve never managed to get all the way through this one, and that means I have to keep it till I read it all” to “You know what? I’ve tried to read it four times and never got past page 50. I don’t care what the rest of the story might be! Get out of my life!”

Weirder yet, I’m rubbing my mental hands gleefully at the prospect of moving on from weeding out books to sorting through old scrambled papers and throwing most of them out. Who is this person, and how did she move into my life?

(Part of the answer to that question, of course, is that she was born from following the suggestions various people made when I asked for help with this problem several weeks ago. Thank you, all of you!!)

I’m starting to have visions of having the whole house reasonably organized by November. And I think it just might happen. Now, excuse me; there’s a table full of paper in the opposite corner of this room that’s begging to be cleared off.

Posted in Getting organized, No Comfort Zone, Possible dreams, Too much stuff

Oh, that Julia. This week she’s giving us another picture as the inspiration for 100 words worth of fiction. Well, the stranger the prompt, the more skewed the story needs to be, I suppose –

He sits on the end of the heavy rock tongue, feet dangling. The view is spectacular, perfect in every detail, he decides.

Slipping off the end of the cantilevered boulder, he drops lightly to the glass floor. Yes, there’s a little refraction where the floor curves smoothly up into the walls, but who can tell refraction from the shapes of wind-carved rock? And the curve is vital to prevent a tell-tale seam where surfaces meet. He paces around, checking for smears or scratches; no, it’s perfect.

He pulls himself back up onto the rock and trots into the cave-like entrance hall. Tomorrow, his exhibit opens. He wonders how many art-lovers will dare to explore it.

The WordPress Weekly Photo Challenge topic this time is “solitary”, and I don’t seem to have a good picture to illustrate the concept. I do have a story to share with you, though.

Years ago we went to California on vacation. Now, if you’ve never been to California, you may not know what beaches there look like. Around here, on the eastern seaboard, the land approaching the Atlantic Ocean tends to be very flat for miles inland, and when you finally reach the shore, the only change (aside from a concentration of beach houses and little seafood restaurants open only in the summer) is that there’s no more vegetation covering the sand, and you can see and hear the surf, rolling in uninterrupted all the way from Europe.

California is different. There, beaches are fairly narrow strips of sand, very clearly defined by cliffs that cut them off from the high ground inland. You have to climb down steep paths or stairs to reach the beach and the Pacific Ocean.

We had stopped somewhere between San Francisco and San Diego (which is a pretty long stretch of coast, but this was quite a while ago, and I just don’t remember what town we were near). Anyway, there was a park of sorts at the top of the cliff, and as we explored the park, we started to imagine we heard music.

That’s a pretty unusual hallucination, so we looked around the park and down over the edge of the cliff, and soon spotted a man with a bagpipe marching back and forth on the strip of sand by the ocean piping his heart out.

Later, when we climbed down to the beach and found him still there, we got into conversation with him. He explained that he belonged to a bagpipe band which had performed for Queen Elizabeth when she visited California some time earlier. Unfortunately for him, the neighbors in the apartment complex where he lived didn’t have a proper appreciation for his music and complained about it. So he went to the beach where he could practice his piping.

This week, Ailsa is asking us for photos of “white”, in honor of the International Day of Peace. (If only…)

Since I posted fall photos yesterday, I think I’ll offer pictures for the other three seasons of the year: 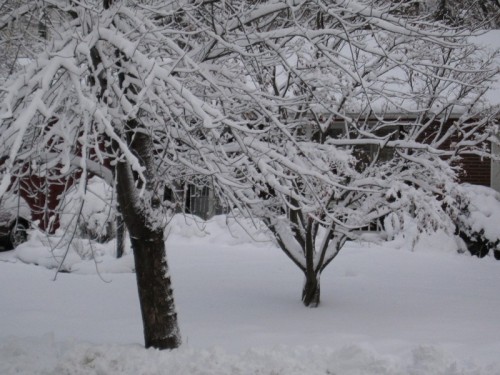 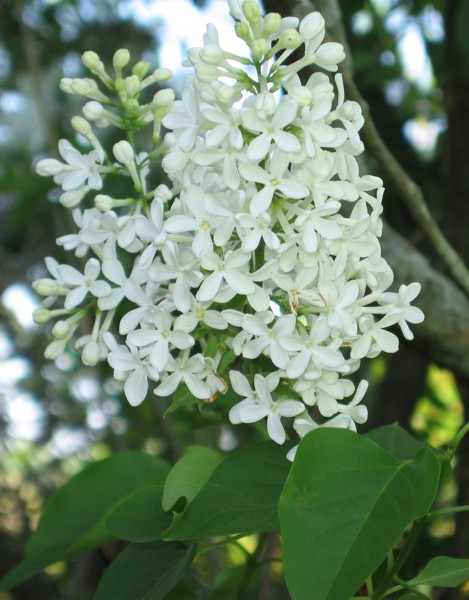 (By the way – WordPress tells me this is my 333rd post. A third of the way to a thousand! Amazing. Anyway, I’m amazed.)

Autumn. Oh, not yet!

Last Sunday, Jakesprinter asked us for pictures of Autumn. But it was still summer! Much too early for fall photos. I had to wait till today, the equinox, the official start of the season, to get these shots.

You know it’s autumn when supermarkets start to sell pumpkins and potted chrysanthemums. Or do you? Stores are notorious for rushing the season, after all – by the middle of January, they’ll want us to come out through the snow to buy summer clothes. 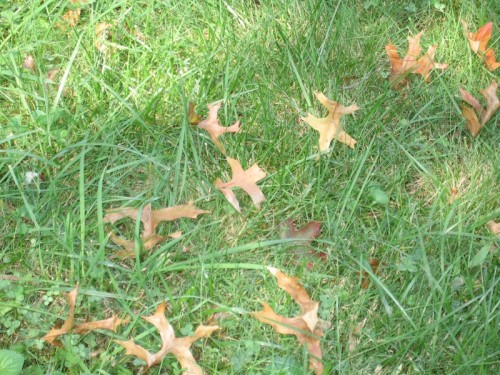 But the oaks are giving the game away. Yep, it’s fall, and much too soon, it’s going to be winter, I’m afraid.

Oh, Julia. You almost did me in with this one. I’m not sure why I found this week’s prompt so difficult, but it took a couple of false starts before I came up with this week’s story for the 100 Word Challenge for Grownups.

The prompt this week is ….as the apple fell….

The bag tore as she hobbled out of the supermarket. Eggs shattered into spilled milk. Last of all came her week’s piece of fruit. As the apple fell, the old woman burst into tears.

Other shoppers rushed to help. “Oh, honey!” An arm around her shoulders. “You come sit on the bench.” Another woman offered to replace the ruined food.

“Now, don’t talk like that. If my mama, rest her soul, was here, I’d hope somebody would do the same for her.”

At last she accepted a fresh bag of food and a ride home. As they drove away, she asked, “Did you get much?”

Big grin. “Pretty soon they’ll all be wondering where their wallets went. You trained me right, mama.”

Another interesting photo from Madison Woods to inspire us with ideas for more supershort fiction. This time I’m being just a little futuristic and science fictiony…

I always wanted to fly. So when I heard about BodyMod I signed up right away, and guess what, I qualified!

It took a long time, but I was ready for that. Surgery, prosthetics, genetic tweaking – you need a real fast metabolism to power those new wing muscles. And after that, months and months of physical therapy to learn to walk with your new off-balance body, and the special workouts where Grounders try their best to train you to move your wings.

The coolest part, though, was the vision mods. Somebody thought we should soar on updrafts, so they spliced in genes that let us see the new infrared colors. I’ll never forget the first time I saw air columns in glowing shades of mell, blending with cooler freng at the sides and tops. Even right after the surgeries when everything hurt, I was so happy all through the prep months. And now, here I am, cleared for takeoff, on a perfect day for flying.

As usual, I’d love to hear your opinion!

A Number of Things
Blog at WordPress.com.
Loading Comments...