Ailsa’s travel theme for the week is “circles”. I was a bit surprised at how few usable pictures I had (partly because I’ve used some of them in other photo challenges – the subway photo I used just last Tuesday would fit right in here!)

After some searching, I found a group of pictures I took almost a year ago at the Philadelphia Flower Show. Here’s my assortment of spherical little succulents – their ancestors had a long history of surviving in deserts, so they balloon themselves with as much water as possible.  (Click on any of the pictures to see the gallery with larger images.)

And over at Cee’s Life Photography, Cee’s enjoying the spring flowers. So she’s encouraging us to share up to three pictures, each featuring just one flower. For preference, she urges us to go out right now and take some pictures. (Thanks to Jo Bryant for making me aware of Cee’s blog.)

Well. Um. October, you know? So, my first two flowers bloomed back in the first half of 2005 – other than that, they’re very different:

This orchid from the Philadelphia Flower Show is a pampered darling.

This little desert wildflower from Chaco Canyon has to be tough to survive. 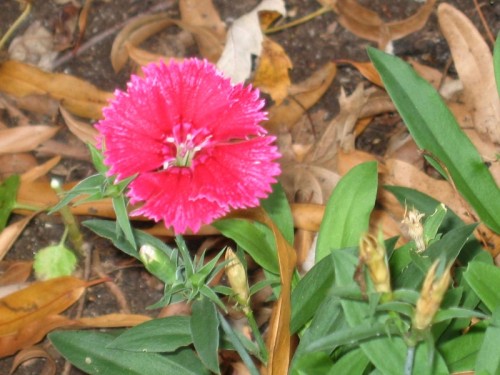 And, last of all, I did go outside, about twenty minutes ago, and found this little burst of pink, blooming away in my front yard. We’ve already had frost a time or two; dianthus are determined. 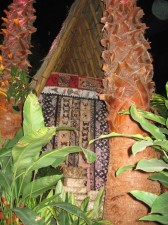 This year's theme was "Hawaii", and this exhibit featured an old-style Hawaiian house.

I went to the Flower Show last Thursday. And it was pretty. And crowded.

And I took lots and lots of pictures – but not nearly as many as usual of the big exhibits. Why? Well, first of all, this year’s tropical theme turned out not to leave much room for, y’know, flowers. Lots of big-foliage plants – many of them familiar as houseplants – some orchids, and not a whole lot else in the way of bloomage.

And then there were the problems of finance. Apparently this year’s flower show got a lot of money from Subaru, which was very nice of Subaru….except that the payback, it seems, was to turn over lots and lots of floor space to what struck me as “your Honolulu Subaru dealership”: Tropical plants fringing one or more cars.

A striking gate for a tropical garden

There’s an auto show at the Philadelphia Civic Center some other time in the year. I don’t go to the Flower Show to look at cars.

But I did take lots and lots of pictures, mostly of the plants submitted by hopeful individual growers for judging. Orchids! Cacti! Bonsai! And here’s a selection of the prettiest or strangest of the bunch.

First, the orchids. Some were strange, and almost all were pretty.

A panorama of part of the orchid exhibit.

They come in all colors –

Some orchids are green

and some orchids are brown

and some are green AND brown.

(not to mention the usual “flower” colors, of course.) 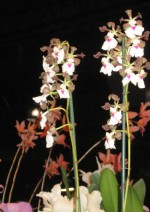 And there were orchids that reached for the sky, or the ceiling

And orchids that hung low. 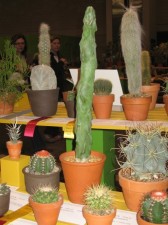 But if you want to see eccentric plants, go straight to the cacti and succulents. 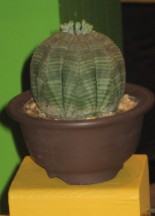 The most geometrically designed plant I've ever seen.

And almost the silliest looking one...

This really isn’t a tomatillo with gone-to-seed asparagus growing out of it. It’s something called Boweia volubilis, and apparently it’s popular among people who grow plants competitively. One table had five or six in a row.

But enough of the bizarre. Let’s finish up with a little respect for the elderly.

At seventy-five years or more, this bonsai was one of the oldest creatures visiting the show.