Saturday before last…well, let’s just say it could have been worse. Much, much worse.

Around dawn, I was awakened by an incredible banging, thudding racket outdoors. The outside wall of the house and the window were shaking. It was frightening…my best guess was that we were having one of those storms with fist-sized hail, and there seemed to be a good chance that the window next to the bed would break at any moment.

It wasn’t hail. Once there was enough light to see, we discovered that our back yard was full of huge tree branches, and in front of the house two large trees had fallen right across the street. (Well – two large trees that we could see. There was no question of going very far – there was too much debris blocking the street and sidewalks.) 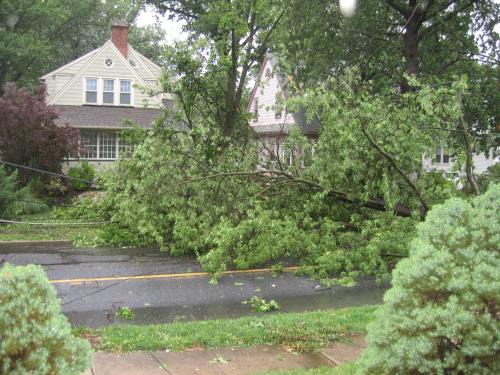 Later, we found out that there was similar damage over an area two blocks wide and five or six blocks long. People are still arguing over whether it was a small tornado or one of those strong straight-line winds; whatever it was, it was very destructive. The only good part was that, amazingly, nobody was hurt.

Actually, that wasn’t the only good part. The storm was impressive, but so was the speed and efficiency with which the worst damage was cleared away and things were brought back to normal, especially considering that there was much more mess than I could get to and photograph. By mid-morning, the fire department had surveyed the damage and taken inventory of places where live electrical wires were down. By mid-afternoon, town workers had cut the fallen trees into movable chunks and cleared the street. By late afternoon, the electricity was working again. (It took several more days to get our Internet access back…but the essentials were back to normal by the end of the day.) Thanks to everyone involved – you spent hours working hard on an unpleasantly hot, damp day.