I am a klutz. I’m terrified when I have to climb a ladder. (I don’t even like the two-step stool that I need to reach the top shelves in my kitchen very much.) I’m an awful dancer. And I’ve struggled all my life to be just a tiny bit organized.

There’s a connection, really. My sense of balance is defective. I’m the sort of person who trips over her own feet walking down an empty hallway. Not as much as I used to – years of aikido classes have helped me keep track of my center and move from my hips rather than from, oh, my left shoulder blade or something similarly silly – but I still need to think about keeping my balance physically.

And keeping my balance metaphorically, allowing a reasonable amount of time for all the things I want to get done and switching to the next job on time? That’s just about impossible. I know other people can manage it – for that matter, I know there are people who can walk across tightropes or dance ballet. I can admire them, but I can’t be one of them. 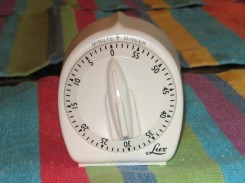 Is this an answer?

For example. Back in March and February, I was finding time to write (fiction) regularly – and almost nothing else less urgent than brushing my teeth was getting done around here. Then I began making a point of getting some cleaning and tossing done, Flylady-style….and I’ve written almost nothing this month. I’m very good at lurching wildly from one side to the other; not so good at keeping an even keel. (If I were a boat, I’d have capsized long ago.)

How, oh how, can I find time to write? As it is, my main character from the fantasy-in-progress and his best friend and a mysterious frenemy have been lost in the forest for the past three weeks. I really need to get them out of the woods and back home so things can get worse for them. On the other hand, I’d just as soon not lose all the ground I’ve gained in cleaning up this place.

Well, I had an inspiration this morning, or maybe a very silly idea. One of Flylady’s favorite tricks is to set a timer for fifteen minutes and clean furiously just until it buzzes.

Maybe I can write Flylady-style, by the timer. I think I’d better give myself 30 minute chunks, since you lose a bit of time at the beginning thinking yourself back into the story. But even 15 minutes by the timer would be an improvement.

Wish me luck. It’s a gimmick, and if it works, who cares?

After the comfort zone

I was lucky with my first week in the No Comfort zone. A project chased me down and dared me to escape it, and I was able to wrap it up within the week. That won’t be true every time. There are a lot of things I want to explore that I won’t even get a general overview of within a week – no more than a first, misleading glimpse.

In aikido training, we practice and repractice techniques again and again. At first, as a new student, everything is challenging and confusing. Then you start to feel comfortable with some techniques – you may even think you’ve mastered them. But the time comes when you realize there’s a whole hidden world in the technique you thought you knew everything about, something more to explore, landscapes you couldn’t see at first, so that you have to forget the mastery you imagined and start learning afresh. In the same spirit, I’ll post about my long-term No Comfort projects when I start on them, then leave them unmentioned until I find myself in one of those new areas of challenge.

And sometimes I’ll settle for short and sweet.
* * *
Oh, and it seems that this is my one hundredth post. Yay me!