I’ve thrown out a lot of very ordinary stuff – reams and reams and REAMS of paper, to start with – in the last month, but there have been some oddities, too. (How many decades has it been since Bandaids came in metal boxes??)

Anyway, we’ve come to the end of the Reverse 100 Thing Challenge. (Actually, a few days past the end.) How did it turn out?

Very well – though mostly as a jump start for later developments. The basic idea was to throw out one thing a day for a hundred days. Not a bad idea, but if your home is already pretty tidy, you’re probably doing that much and more anyhow. If, like me, you have the usual stack of junk mail coming in day after day, throwing out just one item a day would leave your place even more cluttered than it was when you started. It certainly wouldn’t make a seriously messy house look much better than before.

But I didn’t confine myself to only one item a day even at the start, so I was making halting progress. Then, about a month ago, we found out just how bad a house can get when you’re overcome by age and illness. Those problems will catch up with all of us one day, but I’ve become strongly motivated to minimize our clutter while I can. I never expected to say this, but I’ve become a cleaning fanatic.

So where am I now? Half of my house – the “public” part – is as cleared out as I want it to be, ready for anybody to walk in at any time.  It’s proving pretty simple to keep it that way too – look it over every day or so and put things away or throw them out, and actually clean about once a week. (I know, I know – this is kindergarten stuff, but I never went to kindergarten.) 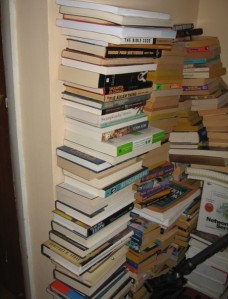 Piles of books as high as my head, on their way to book sales

And I didn’t even clean up that first half by shoving things in the other rooms to get them out of sight. The rest of the house is still messy, but not as messy as it was before, and getting steadily emptier. Some categories of Stuff, like books and yarn, will take a while to clear out, but even there, I’ve at least learned not to go out and buy more for now.

Do I recognize this new person, Sharon the Cleaning Fool? I can’t say that I do, but I think I can put up with her!