So, several weeks ago my father-in-law phoned and said “Let’s have a turducken for Thanksgiving!” And he ordered one, had it delivered to our house, and for almost two weeks it sat patiently in our freezer, until I moved it to the fridge last Tuesday to start defrosting so we could eat it today. (We spend Thanksgiving Day – last Thursday, here in the U.S. – with my mother and have my father-in-law over for a second Thanksgiving dinner on Saturday.) 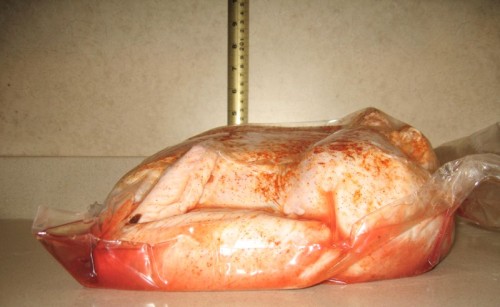 It looks almost like a fresh turkey, a little squashed – much wider and flatter than normal. The one we had was about twelve inches (a bit over 30 cm) wide and nearly as long, but only about four and a half inches – roughly 11 cm – high. And it was sprinkled all over with something paprika-ish.

I don’t have a roaster that will hold something that size, so I bought the biggest disposable foil pan I could find. All the cooking instructions I could find said to give it six hours to roast and an hour to rest. Since we were going to have dinner at six this evening,  into the oven it went at 11 a.m. 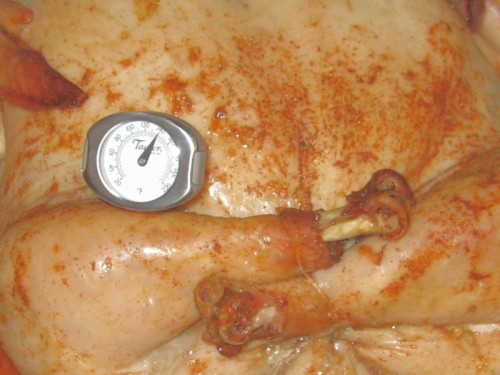 By 2:20 in the afternoon, after almost three and a half hours of roasting, a meat thermometer said the temperature in the middle was 140 degrees Fahrenheit (60 degrees Celsius). Not enough – it’s supposed to reach at least 165 degrees (about 74 degrees Celsius). 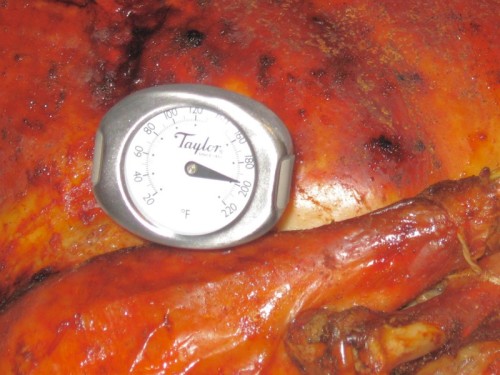 And by five o’clock, it was all cooked.

Getting it out of the pan onto a platter took two people with four spatulas. (With no bones to help hold its shape, it was pretty floppy.)

But carving was ridiculously easy. Just move the wings (not boned) out of the way and slice it like a loaf of bread.

The darker chunks of meat are duck, I believe, and the yellowish part is cornbread stuffing. We never did figure out where the chicken was. That’s all right – it was so much meat the four of us only managed to eat about a quarter of it. But it was pretty tasty, and after all leftovers are part of Thanksgiving dinner.

So our turducken was a success. I don’t think I would want to have one again, though, unless we could find a lot more guests to invite to help eat it.