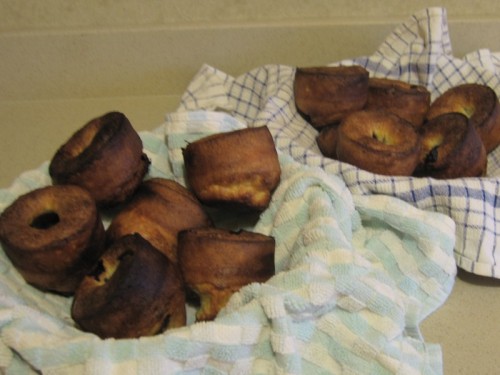 Blueberry popovers, fresh out of the oven

A week ago, Foodimentary startled me by announcing that it was National Blueberry Popover Day.

Not so much because it seemed like a strange sort of holiday – when it comes to days devoted to food, things get much weirder than that. But I had never heard of putting anything in popovers except, once in a while, grated cheese. After all, the whole point of a popover is that it’s the food equivalent of a balloon. You don’t want to fool around with ingredients that will pop the bubble or weight down that steam-fueled inflation.

Of course, I had to make some.

I Googled around a bit and found several sites offering recipes that were closer to Yorkshire pudding with blueberries, and generally with other additions like cinnamon sugar. (Then again, the main difference between popovers and Yorkshire pudding is what kind of pan you bake them in.) At last I decided to go with the simplest possible interpretation.

Mix these thoroughly with a whisk.

Add the flour a little at a time, whisking it into the liquid.

(For Blueberry Popovers, you’ll also need about a quarter cup of blueberries)

Ladle the (very runny) batter into buttered muffin pans. Bake at 450 degrees F – in a hot oven, in other words – for 10 minutes. Turn the heat down to 350 (medium oven) and bake another 20 minutes. Do not open the oven until they’re done, or they may collapse.

To turn this recipe into blueberry popovers, I left out the salt and added a tablespoon of sugar. (I won’t use sugar again.) Then, after ladling the batter into the pans, I put four frozen blueberries – it’s only March; the Jersey blueberries won’t be ripe for at least four months – into each popover.

And they were pretty darn good. The biggest problem was that they were too dark, flirting with being burnt. I think that might have been because of the sugar. It didn’t seem to have much effect on the flavor, so next time I’ll leave it out.

And yes, there will be a next time.

Although I’m wondering how it would work if I used pureed blueberries…the popovers would probably turn out purple, but what’s wrong with that? A little shock with dinner never hurt anyone.

This entry was posted in Experimenting with food, Food, Recipes and tagged nablopomo, postaday2012, project365. Bookmark the permalink.